Countries with a version of Google Arabic

Google Arabic is available in the following countries.  Note that these are not the same versions of Google Arabic but are unique to each country. Each search engine will give you different results depending on how people search in different countries.

There is a purely Arabic version of Google that is not associated with a specific country. We provide the link to this below.

Countries where Arabic isn’t the primary language that have a Google Arabic version.

What’s the reason these countries don’t have their own version of Google? We looked into this and we couldn’t find an official answer but we believe there are a few potential reasons for the lack of an Arabic Google in these countries.

Countries that Google reports trends on in the Arab World

Arabic versions of Google that have been banned from advertising on

According to Google’s Adwords help website there are two countries in the Arab world in which it is forbidden to advertise on Google.

Regardless of the language you try to advertise in Google Adwords is forbidden from showing your ads in these countries due to US sanctions.  As noted above, neither Syria nor Sudan have a local country specific version of Google Arabic.

Difficulties with Arabic in Google

Due to the way Arabic is written there are several issues with Arabic search engines including Google Arabic that can cause your results to vary slightly despite the intent of the search query being the same.

Google does appear to be improving upon these issues as they continue to invest more in the Arabic language.

The Arabic spelling of Google in different countries around the world

The version of Google above is probably they most accurate to the sound of the word Google in formal Arabic. At the time of writing this post this version had 90,500 monthly searches on Google.

Many Gulf Arabs pronounce the letter Qaf ق with a G sound so Google is often spelled the way above in those lands. At the time of writing this post this version had 1,500,000 monthly searches on Google.

Egyptians pronounce the jeem ج as a G sound so they prefer to write Google using two jeems. At the time of writing this post this version had 2,740,000 monthly searches on Google.

Given the confusion between different spellings of the word Google most of the statistics about how often the word Google and its variants are searched are often incomplete. As you can see the 3rd version of the keyword is the most popular but this is just because Egypt has the largest population in the region and they prefer use that spelling of the keyword.

Pay per click advertising on Google Arabic is similar to PPC in English most of the same standards and rules apply. That said, one of the great advantages that Google Arabic ads have over English ads on Google is that there is far less competition in almost all industries for ad space. In many cases there are anywhere from zero to 5 advertisers for Arabic ads but there are 10 positions in total. This typically means the cost per click on Google Adwords is lower, making it far cheaper to advertise in Arabic than it is in English.

The usage of Google Arabic varies slightly from the usage of Google English. Arabic is spoken by nearly 420 million people across the world but despite this there is still a relatively small amount of Arabic content online. Due to this many Arabic search queries produce poor results with limited information. In light of this many Arabic speakers search Google in Arabic first and if they don’t find a good result they translate their search query into English and then search in English. More on this topic here.

Mobile internet usage in many Arab countries is said to be much greater than desktop usage. In our experience 90-95% of website traffic in Arabic is mobile devices (see statistics below from one of our websites).  In light of this you can assume that a great number of Arabic speaking internet users will find your website using a mobile device. Optimizing the Arabic version of your website for mobile traffic is key. Below is an example of a mobile search result on Google Arabic.

How to type Arabic characters on Google search

If your computer isn’t enabled to write Arabic characters you can easily go to your computer’s language section and add an Arabic keyboard as one of your keyboard options.

Here’s how to do this on a Windows computer

Here’s how to do this on a Mac

Once you’ve added an Arabic keyboard to your computer you can go to any version of Google Arabic and type in your search query.

If you don’t want to go through the trouble of adding Arabic to your computer as a keyboard language you can also use a tool called Yamli to convert Arabic words written in Latin letters into Arabic. As in other regions of the world Google makes a strong effort to foster goodwill through creating special seasonal content around holidays. For Google Arabic the most significant of these seasonal content times is the month of Ramadan. Google provides helpful information during Ramadan each year on a special microsite that included things like prayer times, recipes, and info on Ramadan events.

Google is known for celebrating the birthdays of many famous deceased people from time to time on their homepage on Google.com and other versions of their search engine. What’s not known by many people is that Google localizes many of the birthdays they celebrate on their homepage for different audiences around the world. This means that though an American see’s Google celebrating an American’s birthday on Google’s home page someone in another part of the world might not see this on their version of Google. Since the Arab World shares a common history and culture many of the birthday’s and other events that are celebrated on the home page of Google Arabic feature famous Arabs or Muslims that may not show up in other regions of the world. Below are some examples of this. Since 2009 Google has had a dedicated blog for the Arab World. Unlike their blogs for other regions in the world Google Arabia is available in both Arabic and English. It appears that some posts are uniquely written by Arabs for Arabic speakers, while other posts appear to be translations of posts that were written for the English language blog. Below is the link to the Google Arabia Blog.

How to change the language of Google pages into Arabic

Google uses a consistent system across many of their websites to change a page’s language from one language to another. In essence if you are looking to change an English page on one of Google’s online properties just search for the “?hl=en” in the URL and change the “en” (English) part of it to “ar” (for Arabic) making it “?hl=ar”. If an Arabic version of the page exists once you change the URL and click enter you will get the Arabic version of the Google page in many cases. Here is an example:

An important thing to note is that due to the fact that Arabic is a right to left language, Arabic pages on Google typically have their content aligned to the right side of the page. You can get Arabic to show up on the left side of the search engine results page but this typically means that you are getting Arabic results on Google English instead of getting Arabic results on the Arabic version of Google. See the difference below. 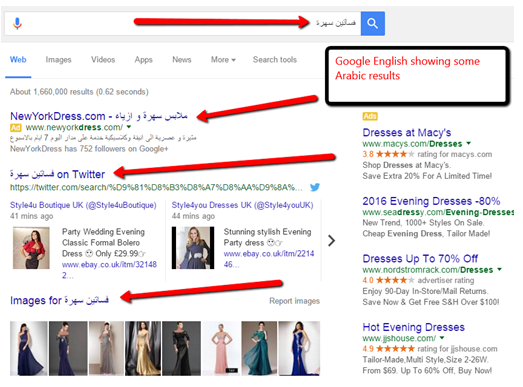 There currently aren’t any real competitors to Google Arabic. There have been many attempts by other companies to create a superior Arabic search engine but sadly none have succeeded. Google owns between 95-97% of the Arabic search engine market and almost all of the search advertising market. Yahoo and Bing make up a small portion of the market but with Google having such a dominant lead in the region it’s hard to consider them as real competitors.

Below we provide snapshots of different types of search results in Arabic. Please note that Google is constantly experimenting with changes to the search results page so these may change over time. 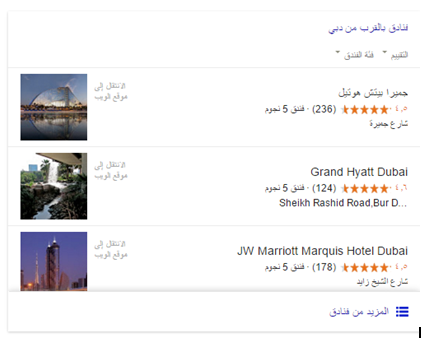 If you need help with marketing on Google across the Arabic speaking world please contact us.